The Theatre of Making Something Happen

I WANT TO CONFESS: I DON’T SCREEN MY CALLS

I’m too curious, too hopeful it will be someone with an outrageous idea, a new thing, an offering—not an offering of help but of needing mine. A call to action.

My day begins with a lack. I’m stranded. So when the phone rings… I’m there.

I’m ahead of there.

The day issues its requirements: Create a world. Populate its landscape. Imagine what you can’t do without. Build a conduit. Construct shelters and color. Locate others. Deliver language. Name the parts. Call it into being. Live there.

That’s the theatre of making something happen, any- where or in any way that yields itself to possibility. That’s (maybe most desirably) putting down your artful stakes in a place that seems too burdened with obstacles, too evasive, too unlikely to produce success, and where it will surely require more than your own insufficient powers to pull it off.

That’s where I want to be. And where I now find myself. Because I answered a call. (Okay, an e-mail.)

What I’m making has a name: web series. Even to pro- nounce it is to give it a completely modern context, when really (at its core) it’s ancient. My “original, scripted, drama web series” is called “Anyone But Me.” It’s about a new generation—gay, straight, ethnically diverse—struggling with identity and modern relationships.

It meets my day’s requirements. It demands the same things of me as any important work. And it has the same allure as that gamble a lot of us grew up on: Let’s put on a show!

Our first episode premiered in December ’08. Since then, we’ve aired two seasons (on the web they run forever and for, the most part, free). We produce 10 episodes a season, each

episode scripted to run from 7 to 12 minutes. We shoot in and around Manhattan. We’ve had nearly six million views since we launched. I know. I know. At first we thought it was one person with OCD watching over and over, but then we got fan mail. From Europe, South America, Asia, Australia.

A web series has reach. And instant responsiveness. It’s the closest thing I know to theatre. Actually, it is theatre if you allow that Twitter and Facebook, with their vibrant, attendant noise, do double duty as chorus and arena. And people in the arena let you know what they think. In this new format, this alternative way of delivering artful things, the audience is a major participant. They post comments on our work followed by comments on their comments. (You’ve got to love how they give the haters a pounding.) We’re in a constant conversation. It’s communal. 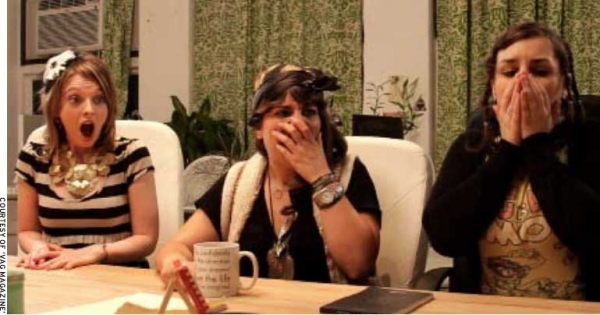 The sweetest thing about making a web series? I own this baby. I am—along with my creative partner, Tina Cesa Ward, who directs the show—executive producer and writer. This is good news. This is good news for you. You, playwright. You, actor. You, director. You, theatre-loving audience.

While you’re waiting for artistic directors to pick their seasons, or literary managers to read your manuscripts (or care enough to let you know if they have or have not or ever will read them), while you wait for auditions, or a YES in any form, and when your teeth-grinding, floor-pacing lack of control over any of this has begun to erode your will to get up in the morning….

Come to Mama. I offer you a new world—a place where reviewers can’t shut you down, where a season keeps expand- ing, lasts forever, and isn’t limited to five productions (several of which are revivals or proven hits), a place of opportunity like the little black box or storefront theatre I revere for its un-cynical vistas and promise of what is possible.

Four members of our acting ensemble were cast right out of theatre programs at Tisch School of the Arts and Mason Gross School of the Arts. Now they’re getting recognized on the subway! Barbara Pitts of The Laramie Project is in our show. Another cast member, Dan Via, wrote his own play, Daddy and produced it with a friend’s company. With our flexible shooting schedule, everyone’s able to work in the theatre. I’ve seen Rachael Hip- Flores, our Streamy Award–winning lead, in several productions. Jessy Hodges appeared in a recent Adam Rapp play at the Vineyard Theatre. And I’ve paid big bucks to see Alexis Slade and Nicole Pacent on stage, as well.

My New York City apartment serves as a set for two teenage girls’ bedrooms, where we slyly hang posters of Bat Boy and the French production of Mon Seine Gauche (aka my play My Left Breast) and leave volumes of Shakespeare and Tennessee Williams lying dog-eared on the floor. (Subtle message to young people: Go to the theatre!) We’ve staged classroom scenes at three different high schools—a little accident involving plaster got us booted out of one. 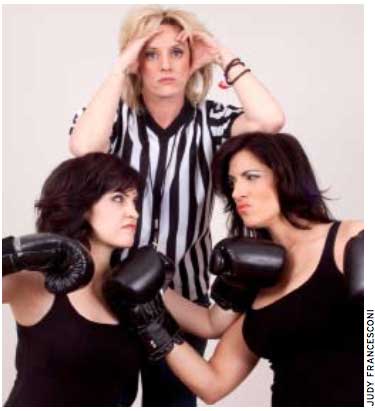 Jill Bennett, Suzanne Westenhoefer and Cathy DeBuono in “We Have to Stop Now”

Here’s how it works: “Anyone But Me” and other web series are distributed on inter- net sites like blip.tv, Hulu and YouTube. Think of them as delivery systems. Or mini television networks, though they don’t buy or pay us outright for our content. What they do is air hundreds of shows online, where anyone can watch anytime. At the top of each episode, they run pre-roll ads, and we get a percentage of the distributors’ ad revenue. The more views (“eyeballs”) a show gets and the better the ad rates blip.tv negotiates, the more revenue a show can pull in.

I’m not saying you can make a living at it. Or even recoup your personal investment. Yet. (One of the earliest web series was Felicia Day’s “The Guild.” She raised money through a direct appeal to her fans. Now, four seasons later, she’s got a deal with Microsoft.) But you can make a name for yourself. You can show the world your stuff. There’s no censorship. No committees. No “suits” saying, “Cut the fantasy sequence.” Or “you need more blondes on the show.” (The latter remark was made to me by a Fox executive on the set of the never- aired “Urban Anxiety,” which had a tad too many urban-looking people, I guess.)

It’s also a celebrity-free zone. Though zombies and puerile comedies are still very much in demand. And, sure, if you get a TV star to show up, it won’t hurt, but none of these things are required to get a web series on.

And here’s a shout-out to women, gay people, people of color: There is a place for us. (Big congratulations to the networks, by the way, for adding six gay characters to the new fall TV season.)

A web series finds its biggest success by connecting with a particular group. “Anyone But Me” revolves around a gay teenage girl bonding with a straight African-American boy. We found an immediate niche mar- ket with people shamefully underserved by mainstream media and hungry to see their stories told. We get so many e-mails saying, “I wish this show had been around when I was coming out.”

Shows like “We Have to Stop Now” or “The Real Girl’s Guide to Everything Else” don’t stop to do a gay head-count. The web is an open portal. Robert Townsend directs an African-American ensemble in “Diary of a Single Mom,” written by playwright Cheryl West. Web series originate all over the map and don’t need a New York production or L.A. premiere for credibility. The opportunities are rife for the idea that wakes you in the middle of the night.

And theatre artists are finding that life is good on the web. Hannah Bos is a playwright/ actress with a Brooklyn theatre company called the Debate Society. She co-created, writes for and stars in “The Mimi & Flo Show.” “I wanted to create something more permanent. It’s a ton of work, but the exposure is priceless,” she says.

Working in a box office, actor Michael Cyril Creighton got tired of “blaming my problems on having a day job.” So he created a Web series about working in a box office. “I like the fact that I don’t have to answer to anyone.” Because of “Jack in a Box,” Creighton was commissioned to write a play for New York City’s Playwrights Horizons.

Jake Wilson “was feeling down on myself and bored.” Up sprang “The Battery’s Down,” a musical comedy web series for which Wilson writes and acts. Pulitzer Prize–winners Tom Kitt and Brian Yorkey (Next to Normal) are among the prominent contributors of original songs. “Doing this has illuminated what I want to do with my life,” Wilson says. Produc- ing it also gave him new skill sets. “Now, I can get an editing job and make $500.”

Caitlin Tegart and Leila Cohan-Miccio of Upright Citizens Brigade Theatre on their series, “Vag Magazine”: “It’s been addictive to connect to fans all over the world.”

From day one of “Yes, I’d love to do a web series,” my thumbs ache from self-promotion on electronic devices. My head spins with all there is to do. Like putting on a web-a-thon when a lack of funds threatened to shut us down after two seasons. Our fans (they kill me!) raised $33,000 to bring us back.

No one said it was easy. But I’m not waiting for something to happen. Or for anyone else to decide whether or not my plays will get seen or my voice heard. When I answered that call, I’d never heard of a web series. Or how to do it. Or where to put it. I’d never self-produced or even thought it was a cool thing to do. Until “Anyone But Me.”

And like another transformative experi- ence in my life—taking the stage in my solo play—it makes me fierce!