“With a twinkle in her eye, a librarian (played by the luminous Kathryn Grody) welcomes us into her domain. Searchers and researchers inhabit her library’s bottomless stacks, hunting for clues to their existential mysteries. A trucker (Happy Anderson) comes seeking something to fill his lonesome nights on the road. She leads him to some Steinbeck, in hardback: a tome hefty and intriguing enough to keep him away from prostitutes. A father (Michael Rudko), urgently wanting to offer his daughter spiritual guidance, sifts through footnotes and uncovers the story of an astronomer who lost his position over a morals charge. And a government functionary, tracking terrorists through their library records, abandons his mission when offered a quote from William Carlos Williams: “It is difficult / to get the news from poems / yet men die miserably every day / for lack / of what is found there.”

At its best, an evening of one-act plays serves up a sampler of such necessary slivers of poetry. Susan Miller’s Reading List, the final play of the evening, concludes with a cacophonous hymn to the vast world of ideas that suggests the evening’s accomplishments in miniature. . .

. . . Miller’s Reading List, which digs deep, takes risks, and succeeds beautifully. Whereas the other pieces are remarkably focused and concise, this one is messy. Expansively directed by Cynthia Croot, it relies less on logic and plot than on the root faith that calls plays into being. Miller begins by invoking a sense of alarm, familiar among liberal theatre audiences, at the current assaults on our freedom of speech. More than just ringing that alarm, though, Miller portrays an array of characters, ordinary people armed with their own particular slices of knowledge against the paranoia behind these assaults.

In a series of fantastic encounters, Reading List cracks the naturalistic frame that has so far given shape to the evenings’ plays. With her story fragments and parables, Miller sermonizes in direct contradiction to the paranoia that assaults creative freedom. Grody’s librarian, the ringleader in Reading List, appears quite ordinary: a heavyset, frizzy-haired middle-aged woman who spends hours attending to the minutiae of her field. But the spark in Grody’s eyes ignites the ideas that have been flashing across the stage, not just in her play but throughout the evening. Led by Grody, the excellent cast shows Miller’s play to be a recipe for alchemy, transforming a brief evening of well-wrought scenes into theatrical gold.” 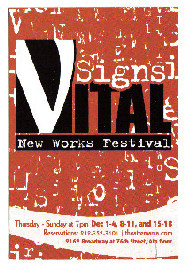 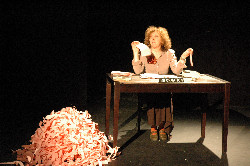