Press for No One Is Exactly 23

A pair of one-act plays was presented at Five O’clock Theatre last week: “No One Is Exactly 23,”‘written by Susan Miller, and “There’s a Dead Mule in the Street,” by Jan Haag. The plays were balanced in length and each was presented in a direct, uncluttered style. But there the balance ended? both in the script and on stage Miss Miller’s play greatly outweighed the other.

The two characters of “No One Is Exactly 23” are absolutely free agents, free to act and say exactly what is in their minds. As the author explains: “What people think, we cannot know; what they say, we can only interpret, and for what they do we have no motive. It is a matter of connecting the dots whose position we have merely surmised.”

But instead of connecting these dots and tying them together in a neat plot or story, the author takes a more penetrating look at her characters and attempts to project this “inside story” on the stage. The worn-out single theme we saw in the first play is replaced by variety as wide as the characters themselves.

In this case the skill of the author is considerable. The audience is clearly shown a Man and Woman who, as is all too common, are not talking with each other but to and often at each other. Though they try to be friendly, they can’t seem to get together. For the Man talks like this: “How good of you to drop by. Mary will be so glad to see you. She hasn’t had a visitor in months, you know. Isn’t it awful the way friends will let you down? I’ve never known it to fail. A friend in need, as they say… (pause) Or is that what they say? well, it certainly is true, isn’t it?” And before long he blurts out at the Woman, “Can’t you follow a straight line of thought?”

John Gingrich, in disheveled black tie and tails, and Linda Diehl, uninhibited and quick, fit these roles to a T. Direction at the end of the act is an improvement on the script. The play’s main flaw is its hurried pace; a great deal is skimmed over, and maybe missed. It is the kind of play that could be seen again profitably.

Back To Press     Back To Plays 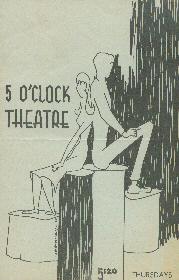