Press for For Dear Life

“IN A WAY, THEY’RE PRETTY touching. They all talked so much. Like they’d seen this movie and wanted to be in it.” That’s Sam, the 16-year-old son of Jake and Catherine, explaining his parents to the audience in Susan Miller’s new play, “For Dear Life,” which opens Tuesday at the Public Theater. “They’re always trying to tell you something,” he continues. “And they act like if they don’t tell you in the next five minutes you’ll graduate or move away and never know this certain, essential thing. I’m always afraid Catherine or Jake will be lurking down the hall or waiting for me at breakfast just for the chance, you know, to say it.” Jake (Tony Shalhoub) is a disk jockey who spins records from the 30’s and 40’s – Fred Astaire, Nelson Riddle, Cole Porter. Catherine (Laila Robins) is a film critic. The play, set in the continual present, spans nearly two decades in the lives of the couple, although not in order. Jake, Catherine and their friends, Dottie and Peter (Christine Estabrook and Joseph Lambie), do a lot of talking in the play, about their relationships, their work, their ambitions, their fears, their psyches, their skin, the nuclear winter and their rampant confusion over calcium. “I don’t want to be having conversations my whole life,” says Sam, who is played by Stephen Mailer. “I expect to have friends that don’t read or write or talk.”

“1 really don’t, with my friends, talk the way Catherine talks,” says the slight, 44-year-old playwright. “I listen because I’m a writer.” Ms. Miller was discussing her characters on a recent bright winter day in her apartment on the Upper West Side of Manhattan. The room bears a strong resemblance to the set of “For Dear Life” – light and spacious, with a small, brightly colored rug on the polished wood floor and shelves filled with a jumble of well-read books. Ms. Miller partly agrees with Sam’s semi-exasperated but affectionate point of view. Unrelenting self-examination – the lightning rod for criticism of the baby-boom generation in general and the television series “Thirtysomething” (for which she has written) in particular – can get tiresome. “I mean, sure, give us a break sometimes,” she says, “go take a bath, or go bowling, shake each other. Sure.”

But she also defends Catherine and Jake: “If characters are aware enough to say, ‘Look, I know I ask questions, I know I talk about things an awful lot, I have to discuss everything, I can be a pain, I know sometimes you want to shake me and I want to shake myself,’ at least you’re dealing with a human being who’s conscious and trying. “Catherine starts out by saying, basically, we’re living in information hell, we’re barraged and assaulted with all of this stuff and what do we do with it? There’s so much to know, so much to sift through, you could go screaming into the night. “What she’s saying, though, is that she wants to find a way to incorporate that information into her life. I think talk is wonderful if it gets you somewhere. But the main thing is that these people have a sense of humor. If they didn’t have that or if I didn’t have that about them, it could be torturous. As Catherine says, ‘These modern jobs – if only we could haul water somewhere, and just fall into bed at night with legitimate fatigue!” Ms. Miller’s play deals with the concerns of people who are trying to make sense of life in a world that seems to make no sense, where, even with the freedom to do anything they choose, nothing they do seems to make a difference. The terrain is becoming increasingly familiar on stage: “For Dear Life” shares some themes with Richard Greenberg’s “Eastern Standard” and Wendy Wasserstein’s “Heidi Chronicles,” both of which explore the states of mind of young, successful urban dwellers who wonder what to do next. “The day my play started previews,” Ms. Miller recalls, “I opened the paper, and there was Hedda Nussbaum, the Armenian earthquake, a friend’s mother had died, and I sat here in tears, thinking, what is this putting on a play? How do I do that, or feel good about it? And that’s a constant struggle. You have to keep going, and keep doing something, and just put it in perspective, but I don’t think anything ever balances out the loss, or the insanity of how some people live. The only thing that possibly balances it is seeing people be kind to each other – small, human things. “There’s a real division,” she reflects, “between the cerebral and the emotional lives, especially of contemporary people, but I don’t think they’re divorced. That’s part of what I was trying to get to in the play, that just because people talk so much, think so much, ask so many questions doesn’t mean that they can’t get to that inner place. What Catherine finally comes to is that to have a child connects us, it’s a generous act. If you put a child in this world, maybe that person will go on to contribute something, to find something.”

Ms. Miller grew up in Hazleton, Pa., earned a bachelor’s degree at Penn State and a master’s in English at Bucknell, taught English and drama at Penn State and in high school, was married briefly and has recently moved back to New York after several years of shuttling between Los Angeles and New York. She has written for television, including an episode of “Thirtysomething” and an episode of “Family.” “I wanted to do more,” she says,” but I was so naive that if someone even added a line to what I wrote I thought it was blasphemy.” Her other work for the stage has included “Nasty Rumors and Final Remarks,” about the effects of an actress’s death upon three of her close friends, which was produced at the Public in 1979. “Cross Country” was about a woman’s reaction to the shake-ups in relationships in the 70’s. Her earliest work was “very absurdist. 1 never named the characters, they were always he and she, or No. 1, No. 2, No. 3.” “For Dear Life” is the least autobiographical of her plays, she says – except for the fact that she has a 16-year-old son, Jeremy. But the play took her four years to write, and ‘”when I started writing this play, he (was only 12, and there are many of the concerns that Catherine has as a mother of a teen-age child that I really didn’t know about then. One of the things I loved doing was imagining what that dynamic would be like. “I wanted to show how people are before they have children and how they are after. Once you have them, you have to deal with each other. You have a responsibility to them, you can’t fake it. You have to be authentic. They’re going to know who you are. And they call you on it. “The other day he and I were going over some of his vocabulary words and I thought, ‘I’m living a scene from my play.’ In some respects the play is about propelling an emotional situation that I know very well into its future.”

She began “For Dear Life” at Yaddo, the writers’ and artists’ colony in Saratoga Springs, N.Y., where she went armed with a title and a reaction to another play.

“I had seen a play about a lot of people who were smart as hell, and the language was wonderful, but it was so anti-humanity – it upset me so much that I thought, couldn’t I write about people who were as verbal, who use language, who had a zest for the language, who were involved with themselves, but instead of groveling on the floor, their hands were up like this,” she says, reaching up and out, “that their questions were out here. That’s all I knew when I went to Yaddo,” she says, settling back into her white canvas couch. She says she is not worried that “For Dear Life” which is directed by Norman Rene covers some of the same territory as “The Heidi Chronicles” and “Eastern Standard.” “I admire those playwrights. I think it’s a product of the best creative minds and spirits tapping into the same source. I think what’s interesting is that, though we all write differently, there are similar concerns. I think that’s a good thing, to think that people are tapped into some common focus.” As she talks, Ms. Miller emphasizes her characters’ universality rather than their specialness. “There’s a simple moment at the end of the play when Catherine says to Jake that they’re never going to have a better moment. Two people have an intimacy, have a child, know what that is. They’re very much who they are – they’re Catherine and Jake and Sam,’ but they also are any couple. In the best sense, not as ‘just another couple,’ but sure, like the Joneses and the Smiths, and that’s O.K., that’s great! “I think at the core is the family, is a relationship of an older to a younger person, is a continuation. We learn from each other, certainly, from our peers, but boy, the things we learn from the young.”

Back To Press   Back To Plays 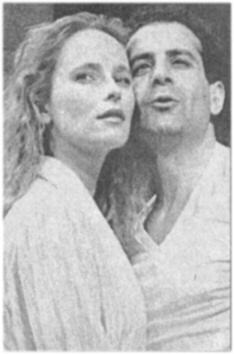 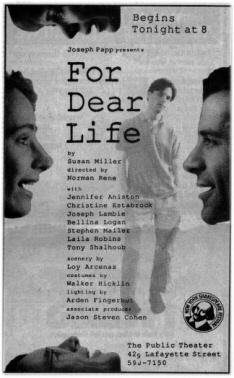