Press for Arts and Leisure

“Once you put feed out, they keep coming back. If you forget or go away for the winter, they’ll starve. They won’t know to look for another place,” J.D. Salinger muses as he fills a bird feeder. In Susan Miller’s thoughtfully conceived Arts and Leisure he could be referring to his brief published literary output and the generations of sophomores who fed on it. In particular he could be referring to David, a college popular American literature professor with delusions of being Holden Caulfield grown up but who is, in reality, a Caulfield clone looking for Never Never Land. He has never become the hero of his college years but thinks he will find heroism renewed in Salinger’s unpublished manuscripts, the supposed secret labor of 20 years’ seclusion.

After David and his ex-student/ now girlfriend/video arts major Ginny break into Salinger’s New Hampshire farmhouse hideaway with her intentions of taping an interview for her grad project and his of scooping up all that wonderful Salinger prose or blowing up the house, he finds that heroism is something different than he imagined. Salinger, played by William Schallert with humor and ease covering an inner tension built during two score and more years, begins a cat-and-mouse game with the intruders that is less dramatic than it is cerebral, but in its very intellectuality it becomes dramatic.

This is not theatre for those who read epic fantasy; it is theatre of ideas and the ideas bounce back and forth between Salinger and his guests like a shuttlecock. His suggestion that perhaps they should go and break into John Irving’s house instead (“he might even offer the spare room”) is the keystone of his strategy. Why do they want him, if anyone’s interested, if he actually has written anything and if he’ll let them off his intellectual hook. Miller knows her field and prepares the battle like a chess game. She finds frenetic lines of unreason for David, nicely delineated by Sam Anderson with a patina of the aging perennial student, which are grist for Salinger’s mill. She gives the video arts major Ginny just enough distance from Salinger’s time and place (although she has just read Catcher in the Rye) to provide a freshness, nicely captured in a delightfully offhand way by Corinne Bohrer as a leftover flower child who swears she’s not, with a slight hardness underneath in Bohrer’s reading which makes one believe her.

There are moments in Jules Aaron’s direction when it would serve the play better to brighten the tempo, particularly in the climactic second act (it would also sharpen the fencing between author and professor) but he plays Salinger’s game as intricately as his protagonist and sets mood well throughout, especially in almost tender scenes between the author and the budding video artist. On Mark Donnelly’s wonderfully homey farmhouse setting, the kind of room a writer could relax in, filled with the evidence of a lifetime of thinking and caring, Aaron stages the action to look much bigger than is possible in the restricted space. Ann Bruice’s costumes are perfect, down to the comfortable shirt and sleeveless sweater Ginny imagined Salinger would wear, with Paulie Jenkins’ lighting creating a fine New Hampshire mood. Leonora Schildkraut’s usually fine sound is highlighted before the opening lights go up by the clever use of a telling period recording of “Jeepers Creepers” (“Where’d you get those peepers”).

If you’ve never read about Holden or Frannie you might miss the whole point; if you have, Arts and Leisure will be your cup of tea, maybe along with one of Salinger’s “good” peanut butter and jelly sandwiches; it all just proves that Salinger’s world is still thriving. His typewriter clicks on at the final curtain; he is still discovering new heroes on impossible quests.

Back To Press     Back To Plays 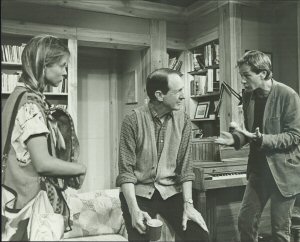