“20th Century Blues is a kinetic portrait of life on the verge of change.”

“With poignant, but still laugh-out-social commentary on the process of aging in America, razor sharp one-liners and thought-provoking questions about older generations adjusting to the younger world, 20th Century Blues takes a tried and true comedic premise and adds a uniquely modern twist. 20th Century Blues breaks the mold when it comes to the female ensemble dramedy.”

DC THEATRE SCENE STAFF PICK! “What Miller has created is a full, funny play that is generous of heart…”

“Miller’s characters are finely drawn, each with her own history, and the talent assembled here is positively electric. 20th Century Blues deserves a wide audience for its important contemporary message.”

“More than blues, however, 20TH CENTURY BLUES is a fugue, both musically and psychologically, on the disorientation aging offers its recipients, as each woman plays her melody to a changing of the guard and, in the process, struggles to hold on to her identity.”

“The play title is “20th Century Blues,” but it just as easily could’ve lamented the eras of flappers or beatniks or, for that matter, millennials. Because ultimately it’s our relationship with time that matters and points to who we are, regardless of what era we were born into. Will we embrace the changes with grace, or cling to the past, singing the blues of our bygone-era?”

“People simply did not leave the theater. We’ve never seen any reaction to any new play quite like this one, which was as clear an indication as any that Miller has created something deeply moving and very special.”

“BEST IN CLASS. “CATF’s world premiere production of Susan Miller’s funny, moving “20th Century Blues” is flat-out the top hit of this annual drama festival. The over-arching theme of Miller’s comic yet serious drama seems to be that aging Baby Boomers ain’t dead yet and absolutely will not go gentle into that good night.” 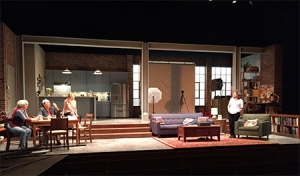