Article – She Got So Old – Oprah Magazine 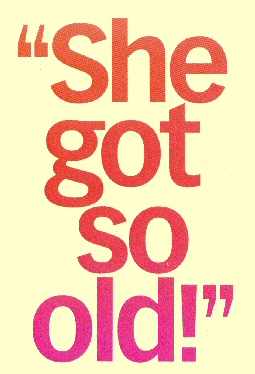 THE ACTRESS COMES ON THE screen. Her face fills the frame. Someone in the audience gasps, “She got so old!” As if it were a crime. As if she’d gone out in her pajamas or had food in her teeth. As if she’d done it purposely to affront us. She completely let herself get old. I mean, she didn’t have to if she didn’t want to. If she’d really tried, she could have saved us the suffering and indignity of having to gaze upon the hideous and unforgivable countenance of someone unyoung. It’s a betrayal. Our loyalties crumble. The bonds of affection come undone. What a shame. She got so old.

The other day in a restaurant I had to pantomime my order. I had to actually pantomime food: “I’ll have a bowl of soup and a side of…of…those…oh, you know…the urnm…” (Lucky it was something the restaurant was famous for.) “Biscuits?” the waitress says. “Biscuits.” Thank God.

I’m 59.I see my own age in the necks of my friends. It makes me happy to see the necks of my friends. I love them for their slopey jaw lines, their less than taut skin. We are all stunned. We don’t know how this happened to us. This stage of things. The foreign shape we’re assuming. The adjustment to this uncomfortable new body. In its way, as awkward and as much of a surprise as adolescence. Remember how unsure of it you were? How unprepared for its full meaning? Those breasts. Those biceps. You have maybe 25 years to belong to it, to respond to its pleasures and injuries, to finally grasp its meaning—to live there. When, with only a few subtle warnings, it starts to change again.

Ethel dances every week with a company of people over 65. Every Thursday she puts on her leotard, sweat pants, Reeboks, and gets herself over to the Y (“Sometimes I call the senior citizen van”), where they rehearse a new dance:

“When I move, I feel like myself.” “How do you do it, Ethel?” I say.
“What should I be doing? Pinochle? Clipping coupons? Watching the serials? The Zoloft helps.”

Ethel, what do you know? What am I going to know that I don’t know now? Give me a clue, an idea, a road map. Tell me.

IT’S SWIFT: HOW YOU START OFF the day looking familiar to yourself and then suddenly, in the middle of the afternoon, at, say, a quarter to 3, you’re not young anymore. In an instant, every year you’ve spent on earth appears on your face. And for the first time since you were a baby, you look your age.

Bill calls. Without a hello-how-are-you, he says, “We’re old. Do you realize this?” It’s too dark in restaurants. I don’t know the name of every music group. I can’t get comfortable in a chair. What did you say? What did he say? What? Oh my God, all the things that irritated me about my father are driving me crazy about myself. All of the intolerable concerns with minutiae, with the wattage in a room, the volume on the TV set. With pace. And the disintegration of culture, of taste, of style. I used to think old people came into the world that way. There were babies. Children. Adults. And old people. It didn’t sink in for a long time that one person, including me, would actually change — inexorably—from one to the other. That one person could embody all those opposing forms.

IT’S 7 A.M. I’M BREATHLESS. I CAN’T keep up with them. They’re in their 50s and 60s, a few 70-somethings, and a can’t-tell-what or two—up and down the stairs, past the dinosaurs, past the Indian storytellers, the clay bowls, ancient things. They stride the length of the museum. We are walking on the wild side. That’s what it’s called, this ritual these New Yorkers have, way too early in the morning, every winter Wednesday at the Museum of Natural History. You don’t have to be old to walk. But I notice everyone here is. And they are positively cheery. Animated. Companionable.
Stirring the air with their opinions. They walk and talk. And afterward, surely, they will be on to other things. To their day. Dinosaurs, storytellers, ancient things. Our witnesses. Our history. Our citizens.

MY MOTHER CALLS. “I’M SEEING SOMEONE”

“You’re seeing someone.”
“I’m seeing a man. We had dinner.”
“How did this come about?”
“Remember I told you I went to the
movies. With the Beautymans. And their friend.”
“Who you didn’t like.”
“I didn’t not like him. I just wasn’t ready
It made me more lonely. For Daddy.”
“So when did you decide you liked him?”
“Be happy for me.”

MY FRIENDS THE ARCHITECTS have been a couple for 25 years. Two men who can still fit into their high school prom tuxedos. “Our life is so wonderful together. I can’t imagine him gone, or me gone and him alone, having to…being together is so…sometimes I think…what would I do?”

THE WOMEN IN MY FAMILY on my father’s side never revealed their age. One of my aunts forfeited Medicare and Social Security rather than tell her second husband how old she really was. This made for some difficulties with the children of these crazy women. Who had to pretend they were born when their mothers were—if you did the math—10 years old. There were facelifts and nose jobs and forged documents. To keep the secret. Maybe it wasn’t vanity, after all, but something they understood about the assumptions people make. How differently we’re regarded by society when the facts are known.OUR STANDARD POODLE IS 14. She can’t see or hear very much. Her back legs sometimes give out, and it takes her a long time to get settled in the right position. A sprawling thing. She adjusts. She is aging gracefully. She isn’t thinking about death. She isn’t mourning her lost youth. She will still leap at what she thinks are squirrels. She makes peace with what remains. We’re tender with her. People are less forgiving with their own kind.

“I DIDN’T WANT TO ACCEPT IT. His growing older. He couldn’t keep up. Sometimes I’d walk faster. I’d get angry at him for not being what he used to be.”

I WAS NEVER CONTENT WITH THE GIRL I WAS. Awkward. Tentative. Longing to be older. Now when I think of becoming an old woman I want the girl back. To let her rip, wild and original. To have, finally, in the guise of an old woman, the freedom and anarchy of saying whatever I think, expressing whatever I feel in a burst of language all my own.

IN THE GAY RETIREMENT HOME, A woman laughs on the phone with her partner’s grandchildren. Later that evening, friends will come by to play Scrabble. They’ll talk about politics and the new John Irving book. And how they came out. How it’s so different for young people today. And how they wish they could tell their own parents, long gone, that they’d had a good life. Hard but good.

MY SON AND MY MOTHER DISCUSS MEN.  My son is now a man. My mother is dating one. And it’s already not going so well. She needs another man’s advice. Jeremy takes her to Las Vegas. They share a room. With a tub so deep my mother has to practice before her grandson goes off to gamble, to see if she can get in and out of it alone. She was a war bride, a singer for the USO. He’s a writer working in Hollywood. They are decades apart in age. He invites her along with his friends to see a play and worries she might be offended by its language. But, he tells me, Nani was laughing. She loved it. They inhabit the world together without judgment, with unconditional love, with mutual awe at how things used to be and how things are. And now they are both hysterical at my mother in all her clothes sitting in a huge tub at Caesars Palace in Sin City. They’re sharing a laugh. Which is pretty much one of the best things you can do at any age.

“YOU’RE NOT TELLING THE HARD PARTS,
” someone says. “Want to know?”

“Tell me.”
“It’s no picnic. You can’t drive anymore. Selling the house. Moving. Losing friends.”
“Getting sick. Getting smaller. All the pills. Parting. Everything goes. You don’t recognize yourself.”
“Stop. You’re depressing her.”
“No, that’s okay.”
“Well, she’s gotta know what’s in store.”
“Shhh.”

“COULD YOU HELP ME ACROSS THE STREET?  Her name is Blanche. She has breakfast every day at the City Diner. I’m on my way to the gym just a few blocks away We walk, hand in hand, across Broadway. Her hands are soft and comforting. I wonder if I’ll be able to ask a nice young person for help someday when I need it. I offer to take her inside, but this is as far as she’ll go with me. Her story, for all I know, is replete with romance and tragedy. I’d like to think Blanche meets her cronies at the restaurant, that she’s not alone. That she has a son or daughter who likes spending time with her. That someone will help her back across the street after she’s done with breakfast. At the gym, in the dressing room, I look around to see that we are all of different generations. And we are all here for the same thing. To keep going.

MY BUTT IS FALLING.  The Design Collapses. How wet you were. How hard. The arch of the body toward pleasure and relief. You lie in the sheets fashioning a future, wondering: What will it be? Who will it be? Later, you think back: Who was I? What was it? Lust for life becomes lust for the meaning of life. Ambition falls away. Or does it? All right then, the pressure to succeed. And guilt. Or does guilt accrue with age? And is there a wonderful chemical component of the brain that diminishes anxiety, erases regret, allows you to forgive yourself?

FIFTY-FIVE OF MY YEARS WERE SPENT IN THE 20TH CENTURY. My father, stationed in France, a Jewish army captain in World War II in charge of German POWs. The McCarthy hearings. Brown v. Board of Education. The first man in space. American Bandstand. And a young girl’s diary. A young girl who died a year after I was born. Who would be old now if she’d been allowed to live. I want to get old. I want the years. To know my son through all those years, turning from a child into a man, even as his sorrows and accomplishments and mistakes grow more complicated as he accumulates experience.

DRIVING, I SEE A SIGN FOR THE ELEANOR ROOSEVELT TRAIL  I want to follow it. I imagine it open only to women of a certain age. Women who haven’t had work done. Yet. Women who come to the aid of other women. Women who refuse to move to the back of the bus. Women who change the world by teaching their sons to be loving and their daughters to be strong. Women who change themselves. And the men and women who love them for it. And as I walk along Eleanor’s trail, I realize we’re better for everything we’ve done and said and regretted and desired and ruined and built up—for all of it. For every year that brings us closer to who we are. And what we can be. And I imagine at the end of the trail, there is another sign. YOU GOT SO OLD! it says. Congratulations! You go, girl! Rock on!