I come out dancing. It’s our first time together—the first thing the audience will know about the character in this play they think is about cancer. And the first thing I’ll know about how it’s going to be with the audience—the other character in this one-person play.If you don’t count the time I appeared with Vivian Blaine in a summer stock production of Barefoot in the Park (and cut her scene by three pages, prompting me to add a new line, “Gee, Mom, that was a short visit!”), my early acting experience was strictly undergraduate. But for the past 10 years, I’ve regularly found myself, a playwright, hyperventilating in the wings, carefully calibrating how much water to drink so I don’t have dry mouth but also won’t have an urge to pee while I’m onstage for 70 minutes. And promising myself I will never do this again. But, somehow, doing it again.A lot of other Susans have come out dancing in My Left Breast since its premiere 10 years ago in Actors Theatre of Louisville’s Humana Festival of New American Plays. Among them: Michele Simonnet as “Suzanne” at I.e Foyer-Theatre Du Palais-Royal in Paris; Deb Pickman of Shameless Hussy Productions in Vancouver, who tours the play all over Canada; Betsy West at Plan B Theatre in Salt Lake City, Utah; Billi Veber in Ancon Theatre Guild’s production in Panama; Carolyn Boone at New Heights Theatre in Houston.

All of us who have played Susan know from the instant the opening music stops whether the audience will be the laughing kind or a quiet, listening thing; whether they’ll receive my flaws and mistakes and longings with an instantaneous recognition of the irony and humor; or whether they’ll be so still and focused that only when a few can’t hold back do the rest feel as if they’re allowed to come out laughing.

Carolyn Boone:“The dancing at the play is such a wonderful shock to the audience, who feel they are in for a ‘dark’ evening. That explosion captures for me the whole character of Susan.” 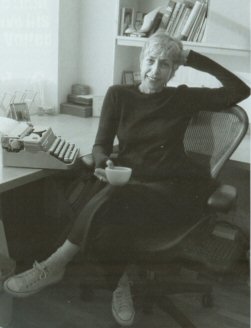 Michele Simonnet: “My director said we have to present her almost as a clown in the beginning—shake the audience with surprise and laughter, and afterwards, they can receive everything.”

In the play, I say: “I am a one-breasted, menopausal, bisexual lesbian mom, and I am the topic of our times. I’m the hot issue. I’m the cover of Newsweek, the editorial in the paper. I’m a bestseller. And I’m coming soon to a theatre near you.” At those words, the audience always erupts with a shout-back of appreciation, a chorus of approval, a clamor to join up (angry letters and contretemps notwithstanding—Out North Theatre Company of Anchorage, Alaska, lost its city council funding after my appearance, because it dared to advertise a play whose title contained the word “breast”).

Betsy West: “I think love is love, and a broken heart is a broken heart, and loss is loss. It doesn’t matter what one’s sexual orientation is. I believe every adult has suffered love and heartbreak and loss— fortunately or not, it’s universal. It was easy, yet painful, in every rehearsal and performance, for me to transfer my hetero experiences to this character. Love is beautiful, and love hurts— everyone knows what that is.”

Simonnet: “We knew it would be very difficult to do the play in France, as everybody here has difficulties accepting illness and female homosexuality on stage. After the first performance, we had a discussion with the audience. Their understanding and acceptance were a relief. One woman said, ‘Oh, it’s okay, the problems she has in her relationship are just the same as if she were with a husband.’”

Betsy West: “I think love is love, and a broken heart is a broken heart, and loss is loss. It doesn’t matter what one’s sexual orientation is. I believe every adult has suffered love and heartbreak and loss— fortunately or not, it’s universal. It was easy, yet painful, in every rehearsal and performance, for me to transfer my hetero experiences to this character. Love is beautiful, and love hurts— everyone knows what that is.”

Simonnet: “We knew it would be very difficult to do the play in France, as everybody here has difficulties accepting illness and female homosexuality on stage. After the first performance, we had a discussion with the audience. Their understanding and acceptance were a relief. One woman said, ‘Oh, it’s okay, the problems she has in her relationship are just the same as if she were with a husband.’”

The audience always takes me by surrprise. They’ll find me afterwards, want to hug me, say, “That was my story,” or tell me their own. Some will say, “I didn’t expect the play would be so funny.” Or”What ever happened to Franny (the lost love I obsess about)?” Women approach me, their heads

Deb Pickman: “I wasn’t prepared for how many in the audience assumed I was Susan. After the show, people would come up and say, ‘How’s your son now?’ And, ‘I lost my left breast, too.’ A man who had breast cancer told me he related to everything in the play.”

Simonnet: “We did 50 performances in Paris and almost every day some people were waiting for us afterwards to talk. And they all say, ‘It’s my story’ or ‘It’s my mother or sister or wife’s story.’ ” 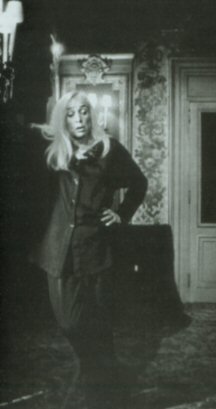 I never wanted to write about it. It wasn’t until I found a metaphor to encompass the other things I did want to write about that I was able to attempt a play incorporating my experience of having breast cancer at 36. What gave me the way to do it was something my son said on the day I told him about my mastectomy. He was eight We had these matching Pep Boys T-shirts—you know, written across the chest: Manny, Mo and Jack. And he said, “Which one was it, Manny or Jack?” Jack, I tell him. “Well, what did they do with it?” I don’t know. “Well, I’m going to go and get it back for you!”

My Left Breast would be a play about my eight-year-old turning twenty. And my own turning. It would be about friends who compose an ad so I’ll meet someone after a lover has gone. It would be about those in-extremis moments when you’re holding it together, but the doorman you’ve asked to hold your pizza eats it instead, and you scream at him for each and every loss you and the world have ever known. It would be about the other women in the changing booths getting fitted for a prosthesis. None of the other actresses who played the role had breast cancer. I asked them how they handled the last moment of the play, where I reveal my scar.

Boone: “At the end, I unbuttoned my shirt as the lights faded to black, and the music played…a dramatic moment. And this illusion caused a gasp every night. This was the moment that matched the dancing!”

Simonnet: “Would I wear a false scar? That we eliminated immediately. My director insisted we had to let the audience’s imagination work; he underlined the importance of the scar in this story—it is what stays, the mark of meaning. So, at the end, I started to open my shirt. As the lights faded, the audience retained the idea of the scar because it was the last image they had. Yet people believed I had breast cancer, and people talked endlessly of this end of the play.”

People have asked me, since it’s such a personal piece, whether I’ve updated the play or changed it in the context of my own changes. But it exists at a certain moment in time, and the text remains faithful to that. The words haven’t changed. Though, of course, I have. This elasticity, the shaping of circumstance to illuminate it, is what makes room for other actors to enter the world of the play. The moment I write what happened, what was said, how it felt—the actual changes. The structure of My Left Breast reshapes time and so bestows a reshaped reality. In the same way another performer can reshape the exchange with an audience and add layers to the stakes of the drama. Transferring this autobiographical fiction to another actress is the next stage of a metatheatrical experience.

I ACTUALLY HAD TO AUDITION FOR THE role of Susan. Under the direction of Nela Wagman, the play was chosen for the Humana Festival, but its artistic director, Jon Jory, didn’t know if I could act, so he asked me to read for him. It always made me feel, happily, that the part was up for grabs. But would other people want to take on this role? Would other theatres believe they could acquire the play for their own companies, pursue their own artistic expression of a piece that is to some minds the sole property of the one already-existing Susan? (In the Scarlet Theatre production at Northwestern University, in Evanston, III., the director, Arianna Ross, conceived of three actresses playing the part.) What is the pressure on performers to honor “the facts” or faithfully render a character that is based on a real person? How does another actor attempt to own the “real life” experience?

Billi Veber: “I was more reluctant to smear on layers of physicality. So I took a different approach. I thought of myself talking to a friend saying: ‘Some woman told me this amazing story, and now I’m going to do an impression of her telling it to me for you.”

Simonnet: “During the work of finding the right French words for each expression, I felt I was learning to know a friend. We didn’t know the ‘real’ Susan literally, but there is so much of her in the lines. We could have been easily restrained by too much respect, and that could have destroyed it all.”

I don’t think there are fundamental differences in what makes an autobiographical play work as a piece of theatre compared to a play in which the author does not make a personal appearance, isn’t named as a character, but nevertheless dwells among us. The issue in this collision or merging of autobiography and fiction is whether a character has life beyond its creator and whether its creator will give over that life.

Anyway, that eight-year-old boy who wanted to “get it back for me” is 31 now, a writer himself. And the play I first tried out—script in hand, valium in my pocket, under a few clip lights, at Naked Angels in New York City—continues its life. So maybe it’s only fair to ask myself the question I asked everyone else: How does it feel to play someone who exists somewhere in time, who is real but also a fiction? I think it feels like a chance. A chance to encounter. And connect. A chance to approach the character and the history of me with wonder and forgiveness. A chance to say the words spoken by so many others to whom they also now belong.